A special Festival Exhibition at Old Chapel Gallery, Pembridge, to run during the Hay Festival of Literature and the Arts 2022, opens on Saturday May 21 continuing to the end of June and features the work of talented British artists and makers from far and near.

Heading the line up is artist Lynda Jones formerly from Sunderland. She settled in Monmouth in the early 1980’s, where she has lived ever since. She studied Art Foundation at Newport College of Art & Design, followed by a degree in Visual Art at The University of Wales, Aberystwyth.

Her canvases are mostly depictions of landscapes in the Monmouth area – the final image often bears little relation to the original subject but all have a common starting point – the memory of a place she knows well.

Former graphic designer Joanna Griffiths studied at the London College of Printing and had a successful and long career in commercial art. She now paints full time from her studio in Powys. Her pastel artworks capture the hills, moors and farmland of the Welsh Marches. Depicting all seasons Joanna often only walks a short distance to study the subjects she loves.

Northumberland-based artist, Mary Ann Rogers, paints vibrant watercolour paintings full of energy, from an in-depth knowledge of her subject matter. Her studio is surrounded by the wild hills of Northumberland, whose inhabitants, along with her own menagerie of birds, feature in her work.

Potter Josie Walters makes tableware and cooking pots in earthenware clay, which are decorated with slips and coloured glazes. Most of the pots are thrown on a traditional momentum wheel, even though many of the finished shapes are oval or rectangular. 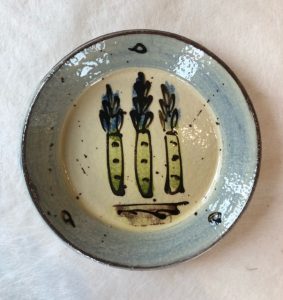 Ceramicist Simon Rich had such a strong interest in pottery at an early age that he started to teach the craft to his fellow pupils at school.

Upon leaving school, he looked for an outlet for his creative talents and joined the studio of the famous Alan Caiger-Smith at the Aldermaston Pottery. He remained there for five years before establishing himself in West Wales. He now creates beautiful ceramics with a Crystalline glaze.

Ali is a contemporary jewellery designer/maker, based in Herefordshire. In 2004 she decided to study at Hereford College of Art as a mature student; fulfilling a long awaited passion to work with metal. She started with metal sculpture, slowly scaling things down over the years and now creating jewellery, which still retains a sculptural quality to it.

Rachel Bailey’s jewellery explores her love of wild creatures, our native animals and birds and magical realms. The semi precious stones she uses are an integral part of her inspiration as they suggest landscapes in which the creatures inhabit. Each piece is individually made and therefore unique, in sterling silver and Hallmarked in Sheffield. 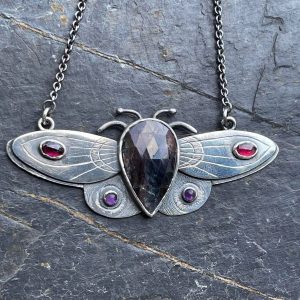 Running concurrently is an ever-changing collection of unique garden sculptures to enhance your outdoor space in a variety of media such as stoneware, forged iron, iron resin, stone resin, stainless steel, glass and more including the work of several sculptors new to the gallery.

Signup to our Newsletter